From www.IrishCentral.com   -   A Buffalo author is set to award her local Irish Center a portion of her book sales after the center suffered a heartbreaking $3,000 robbery at the start of January.

After learning of the theft via IrishCentral, Rosanne Higgins, a local researcher and author, decided to help out the struggling community center by donating 25% of the proceeds from her book sales when she speaks at the Buffalo Irish Center on Sunday, January 28. On top of this, the author will donate 100% of the proceeds from any online sales made on her book that same day.

Having celebrated St. Patrick’s Day a number of times at the BIC, as well as attending other special events and presenting her books at the Buffalo Irish Festival held there, Higgins was eager to help out this massive community rock.

“Buffalo has a proud Irish history and the BIC has been at the center of most of the activities that keep our history and culture alive here,” Higgins told IrishCentral of her decision to donate book proceeds.

“Having run a nonprofit myself, I have an understanding of the magnitude of such a loss when you consider that every dollar raised is earmarked to keep the programs running.

“The more complicated answer has to do with a commitment my husband and I made not too long ago to help the people in front of us.  Our country has experienced a great deal of turmoil in the past year and we have seen it bring out both the best and the worst of our fellow Americans,” she continued.

“Helping out when help is needed is what we do.  The BIC needs our help and we are able to do this one small thing.  We hope that it will inspire others to help out as well, where ever, when ever and to whomever is in need.

On January 28, Higgins will speak on the research behind her latest book “The Girl on the Shore,” which is set partially on the Aran Islands in Ireland. The installment is part of her five-book series of historical fiction that tells the story of three Irish immigrant sisters in nineteenth century Buffalo, NY.

“The Irish have a fascinating history in Buffalo,” Higgins explained to IrishCentral.

“Our ancestors helped shape Buffalo into one of the most important cities in the world during the early nineteenth century.  We were canal builders, worked as scoopers, carpenters, bricklayers and stonemasons.  We owned pubs, kept the streets safe, and held public office.

“When I was in graduate school, I studied the inmate records of the Erie County Poorhouse here in Buffalo and became fascinated by a portion of Irish immigrants seldom discussed in our city’s historical record.  So many people came to Buffalo in hopes of a better life.  Many experienced tragedy on the journey and ended up in county poorhouses.  My novels share this untold part of Buffalo’s history.”

On Saturday, January 6, opportune thieves made off with $3,000 from Buffalo Irish Center, taking with them a five-foot-tall safe, a yellow dolly, and a cash register after making a brazen dash through a side door left open by maintenance.

Buffalo police are currently checking security footage from surrounding businesses as part of the investigation. It is yet unknown whether a thief acted alone or if a group was involved.

"It was a rough start to the New Year but our dedicated volunteers will continue their work to keep this Irish Heritage center open despite the theft of funds and historical documents," BIC chairperson Mary Heneghan said.

"It is truly heartbreaking to see this small non-profit targeted in such a manner."

On February 24, a benefit night will also be held to raise funds for the center. With raffles and music, bands and artists set to perform are Wyatt Coin, City Powered Radio, Shambles, Cardboard Homestead and Evicted.

Over the past few year, the Irish center has hosted a Go Fund Me campaign in order to make restorations and improvements to the building in order to keep it in good repair for future generations. The center’s original goal for 2018 was $10,000 which could be impacted drastically with the loss of $3000 in such unfortunate circumstances early in the year. You can donate to the Buffalo Irish Center through their Go Fund Me campaign here.

Contributions to the center can also be made by purchasing Higgins’ book on Sunday, January 28. The proceeds of any online sales made on http://www.rosannehiggins.com will be donated to the BIC. 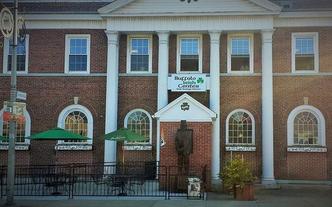