Available in paperback and in eBook versions.Click here to order on Amazon. 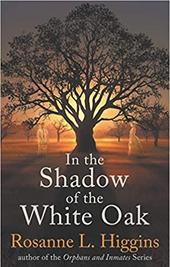 Author Rosanne Higgins gives some interesting background for this new book during her interview with Katherine Earl on the Erie County NY Youtube Channel. Hear about Seneca treaty negotiations, the University of Buffalo’s medical department, and the scourge of tuberculosis.

In the Shadow of the White Oak

Maude Travers checked to make sure no one was looking before she laid hands on the great white oak, the oldest tree in the city of Buffalo, New York. It’s a witness tree, after all, having stood young and strong when the Seneca people hunted this land in the eighteenth century. One hundred years later, it was incorporated into Frederick Law Olmsted’s vision for the most innovative system of parks and parkways in the United States. Maude was keen to know what the tree might manifest to her. Visions appeared in rapid succession, revealing people and events through three centuries of stewardship. The first left her with a palpable sense of fear; the second profound joy; and the final, a grief so overwhelming the pain lingered with her, long after the vision had faded.Who were these people, and how were their stories intertwined? Using her powerful gifts as a psychic medium, Maude sets out to unravel the mystery, only to be sidetracked by some devastating news. Soulmates past and present are threatened as Maude slowly grasps that her gifts alone are insufficient to reach into the past and correct the course of history. Widening her circle of gifted seers to send healing across time, she prays their collective efforts will be enough.